The No Compromise gravity racer 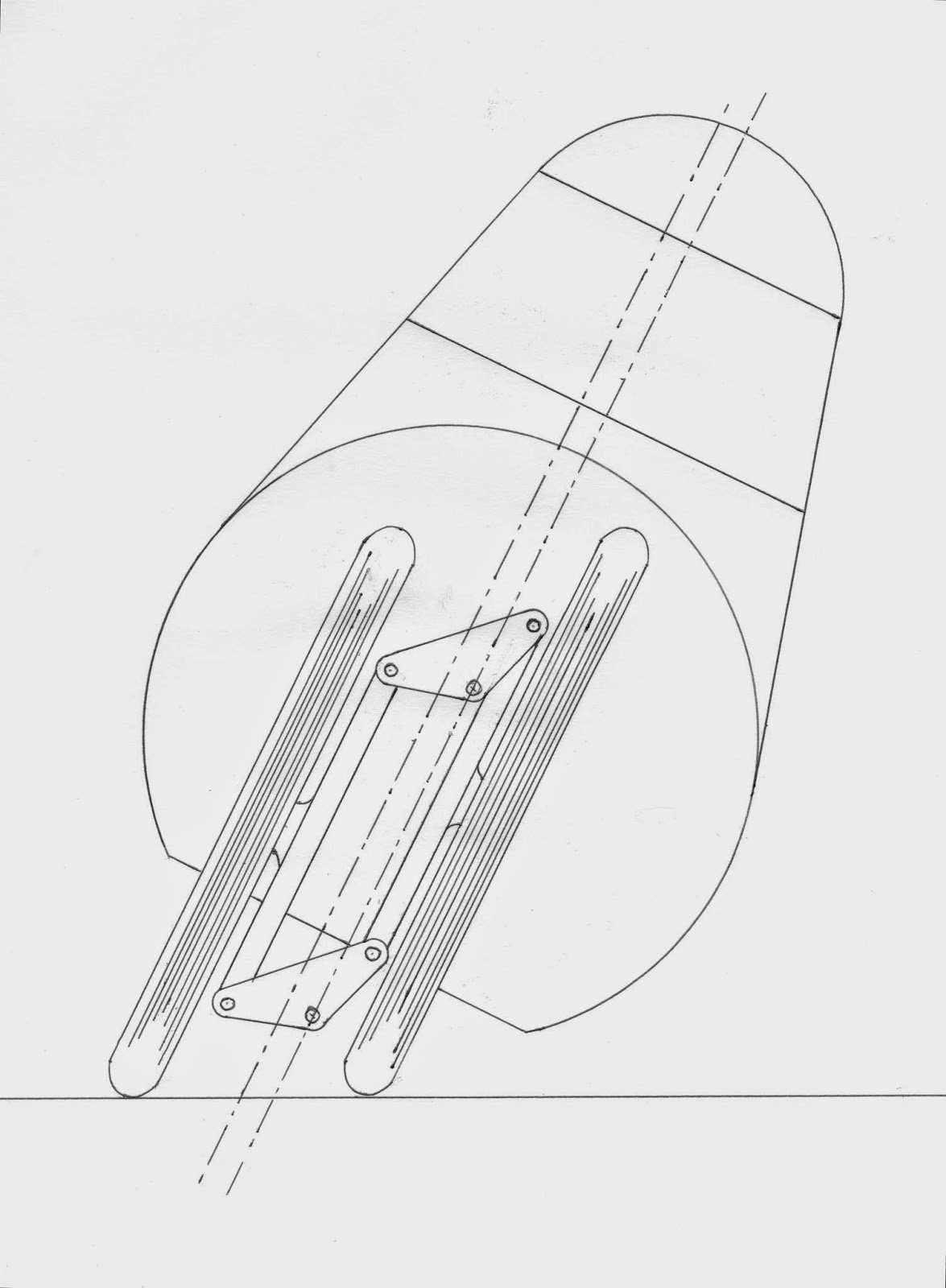 Building a gravity racer is battle of compromises that limit its performance. But what if you could have your cake and eat it? Here is a proposal that might allow you to do just that

Do YOU want to build a gravity racer? 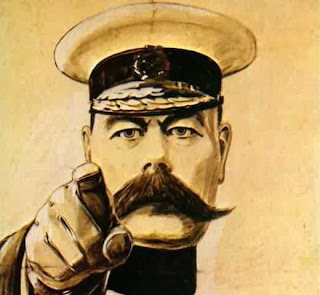 As I explained in my last post, the gravity racer project that was the subject of this blog, ground to a halt for reasons that have nothing to do with the engineering challenges. Actually the design is still a sound concept and, more than that, there was still much more of the deign to come that had not been aired in the blog.
With this in mind, and as there has been so much interest in the blog, I thought it might be worth floating the possibility of getting the project going again. However, right now I’m not in a position to build the car myself. Yet a blog featuring a stream of engineering ideas unsupported by practical experience is not a very sound basis on which to advise others. So, no car, no blog and this really is the end.
However, if someone out there is considering building a gravity racer and is wondering how and where to get started, they would be very welcome to adopt this design. In fact I would happily work with them, sharing ideas in return for their experiences. Then, the results would be the basis for more entries in the blog.
If you fancy this, please get in touch and let’s start talking to see where it takes us. But, for now, thank you for dropping in and goodbye.
Posted by The Engineer at 05:27 1 comment:

I can’t believe it’s three and a half years since I last posted on this blog. So why the radio silence? Well the reason is quite simple. From the start, the project was intended to engage my sons and get them thinking about engineering and science. I wanted them to think problems through and apply their theories to a practical application. I also hoped it would encourage them to pick up tools and use their hands in direct contrast to their normal digital, multimedia lives.
In that respect, it failed. Perhaps I was running too far ahead, or maybe it was never going to be their thing. Whatever the reason, it didn’t work out the way I hoped and the car was put on ice. As the project had not really got rolling, I stopped posting on the blog on the assumption that nobody was likely to take any notice of the very truncated story.
Imagine my surprise, then, when I visited it recently to find the entries have been attracting a steady stream of visitors over the intervening period. I must confess to a degree of guilt that the story stops mid flow and I apologise to those who found the blog and were disappointed when it stopped dead.
So, what to do now? I have an idea. See the next entry for details.

Posted by The Engineer at 03:06 No comments: 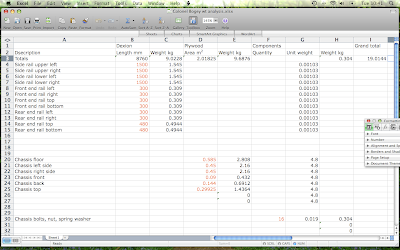 Before we start cutting metal, we need to know that our design is going to meet our weight target. Normally with a racing car you would be building it as light as possible. With gravity racing, that is not necessarily the case, but more of that later. As I’ve mentioned before, the maximum allowable weight dictated by the rules we are building our car to is 100kg, but if the chassis comes in at 75kg, then we are unlikely to save enough weight on the other bits to meet that target. Dexion and plywood are not the lightest of materials, although I’m still reasonably confident it won’t be cripplingly heavy. But to make sure I’ve put together a simple spreadsheet.

Each component is listed down the left and the estimated length of Dexion or area of ply is put in. I’ve arrived at these figures by scaling them up from our model. They are not going to be totally accurate but can be fine tuned as we make progress. For now they give a ballpark figure and I’ve highlighted them in red to show they are just estimates. I’ve then weighed a piece of Dexion to find a figure for its weight per metre and the same for the ply to find a weight per square metre. These figures are then used in formulae to give actual weights. Excel keeps a running tally of these with a grand total.

Currently the figure is sitting at 19.014kg, less than 20 per cent of our target weight. Not bad for the single biggest component on the vehicle. As work progresses, I’ll be adding more to the spreadsheet and keeping an eye on the running tally. For the moment, though, it looks like we may be carrying quite a bit of lead if we decide we want to run at the maximum allowable weight. 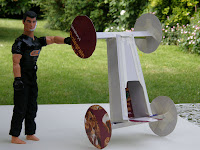 Models are one thing, but how big should the real thing be? With Action Man being about one foot tall, our model was about one sixth scale. We packaged our driver as tightly as possible and this resulted in a wheelbase for our model of 200mm that corresponds to 1200mm on the full sized car. Treating that as a minimum, what is the maximum we could consider?

Our aim is to build a car that will not only be eligible for the event we entered this year, but also for as many other similar events as possible. Comparing rules, the maximum allowable vehicle lengths specified range from 2300mm to 2500mm. We plan to opt for the shorter measurement to maximize our entry options.

Trawling the internet for information about gravity racers, the optimum wheel size is generally felt to be 20 inches. This takes into consideration bearing drag, aerodynamic drag and cornering stiffness. Incidentally, on bicycles the wheel diameter seems to refer to the outside diameter of the tyre, unlike cars where it refers to the distance across base of the rim. If we take that as our wheel size, or 500mm in metric, then the maximum length minus half a wheel at the front and half a wheel at the back gives us a maximum wheelbase of 1800mm. No problem. Compared to the model we have a full 600mm or 2 feet leeway.

Now, what about the track? If a car has a long wheelbase and narrow track it is usually very stable but slow to change direction. A short wheelbase and wide track, meanwhile will change direction easily but sometimes even when you don’t want it to. Having had an alarming incident on the event first time round, I want the car to have controllable handling with good recovery characteristics. This is particularly important in a gravity racer because they run very high tyre pressures that make the tyres very unforgiving. Plus you don’t have the luxury of engine torque to alter the handling balance by shifting weight distribution with the throttle.

The relationship of wheelbase to track on a car is interesting because throughout the history of racing cars it has usually remained about the same, about 1.6 to 1. The interesting thing is that this is very close to the Golden Ratio [1.618:1], the relationship that keeps coming up in art and nature. For more information on this phenomenon, Wiki it. It would appear that this golden ratio is traditionally regarded as the best relationship for good handling.

For want of a better reason, lets try applying it to our car. If the wheelbase is 1800mm then the Golden Ratio would give us a track of 1112mm. Browsing various rules again, maximum track widths range from 1100 to 1500 so I think that our figure is a pretty good starting point. However, part of the design philosophy of the vehicle is to allow simple alterations and encourage continuous development. Once up and rolling we can see how it behaves and experiment with different proportions if it has any nasty habits. 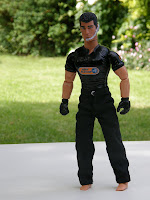 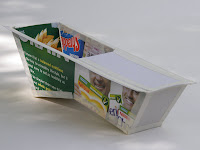 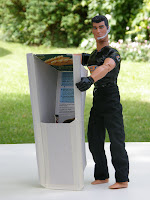 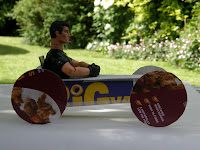 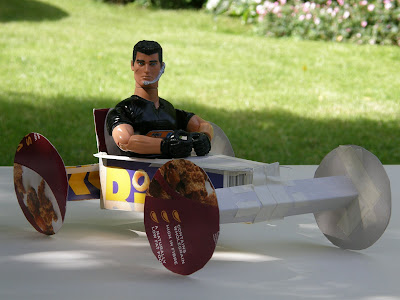 Here is our scale subject. Note, if you will, the faithful reproduction of the real driver’s physique. No sniggering at the back please.
We started with a simple five-panelled box [four sides and a bottom] cut closely around our model. Materials included cereal packet to represent the plywood and masking tape to represent the Dexion. Yes, I know the tape can do things Dexion can’t, and the same goes for cardboard and plywood, so we had to assign certain rules to their use. That includes not bending or curving the card and making sure the tape can only be used along a 90-degree angle. This ensures, what we make in miniature we can build for real.
I don’t know about educating my sons, but I found it a very enlightening process. The five-sided box is not very rigid, particularly in torsion because of its open top. You can make it more rigid by closing the sixth side but then a driver can’t get in or out. The challenge is to design in as much stiffness as possible while still allowing access.
With said box in our hands and trying different bits, it very soon became clear what was going on and how to capture the desired stiffness. One innovation we tried was a triangular section floor. The theory was that if it was closed off with a third panel under the tub it would create a rigid structure that would lend strength to the whole chassis. It was a failure making no discernable contribution to the overall stiffness and we left it out of the final design.
The crucial piece of knowledge I picked up is that under torsion, that is twisting the ends in opposite directions, the sides of the tub try to move in opposite directions. If you can prevent this you pick up loads of strength. We achieved it by closing off half of the tub top then putting flanges along the top sides to prevent them buckling. Try it and see for yourself.
With hastily assembled wheels and axles you can see the basic concept for our car in three dimensions. Now, doesn’t our chap look proud?
Posted by The Engineer at 09:01 No comments:

Back of an envelope 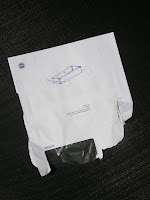 All the best designs start on the back of an envelope, and here’s ours. Literally it was a quick sketch I scribbled on the back of some paper hurriedly plucked from the recycling box to demonstrate the principle to my sons. Once they saw, they understood and, with both of them on message, we could proceed to the next stage. To help them understand the principles of structures and also so they can have some design input, the plan is to build a cardboard model of the chassis. Currently we are recruiting our scale subject, one Action Man toy.

Posted by The Engineer at 04:49 No comments: